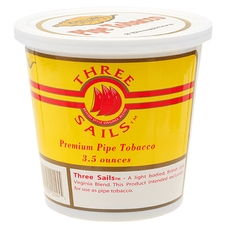 Daughters & Ryan - Three Sails 3.5oz
Surprising.
I had heard about this blend a few times, each of them mostly positive. Never mentioned the cut, or if they did I didn't think too much of it. First things first, its a good price at full price (10.00 USD) its 3.5 ounces, and you get it for what you get half that for in other tinned tobacco. So I opened this up, and was quite surprised, staring up at me was what I can only describe as "cigarette tobacco" Oh My, did smoking pipes accidentally stock up on some RYO disguised as pipe tobacco? Well long answer short, no. Although this cut is rarely used now, because of it being used for cigarettes, it is still a totally valid cut of tobacco. I would recommend that no matter what you do with it, when you take it out of its container, do it inside, over a platter. The tobacco is light, and stringy, it grabs on to eachother, and doesnt want to let go. So just taking a clump out to stick in your pipe, or put in a jar, will lead to tobacco going everywhere if you're not careful. The cut of to the tobacco lets it all intertwine and touch, so it will likely not need any relights. So as I was saying, I opened up the "tin" and I load up my pipe getting small amounts of tobacco everywhere (don't worry about wasting it, there's a lot there) light it up and, its Virginia. Its a good Virginia, but I'm a new smoker, so I cant pull out liquor flavors from a pipe full of strait burley. Its a bit hard to load because of its cut, but taking a few clumps out and stuffing them in your bowl, then twisting the top one a bit to get them all intertwined worked great for the couple of bowls I smoked before jarring it up. It takes easily to flame. The cut is small enough that it pretty much immediately catches. After tamping and relighting I was off to the races. You could theoretically not even tamp this. With the thin cut, and how intertwined the tobacco is, it would likely not be a problem till you reach the bottom of the bowl. Though if you tamp, you will likely not have to relight, at least not much, and get the holy grail of smoking the "Fine white ash" (which I often get from an old pouch of carter hall, but ignore that) So you get to the bottom of the bowl. Whats down there? A puddle of nicotine infused water? Soaked tobacco that can hydrate children in Africa? Nope, nothing, its pretty much perfect to smoke out of the tin, due to the cut, even if it was a bit wetter, you probably could smoke the whole bowl without much trouble. In case I haven't mentioned above, because of the cut, it will likely smoke a tad hot, and will be a quicker bowl than other tobaccos. Though this may be due to the way I packed it.