Plato's academy was devoted to analyzing what could be known by the senses. The old philosopher surely would have been intrigued by the appearance, aroma, taste, and feel of this pleasing Sutliff aromatic spiked with Spicy Latakia. Sure to appeal to both Aromatic and English smokers. 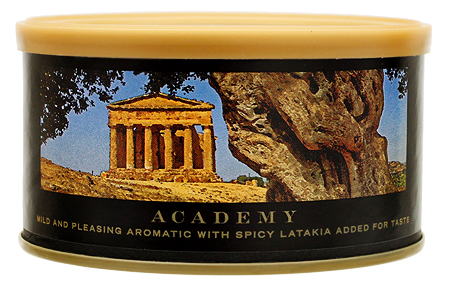 Customer Reviews (2 Total)
Write A Review
Write a review
Overall Rating:
4.75 out of 5 stars
Seemingly Good Mix
By: robbiwan
Product: Sutliff Academy 1.5oz
This is my first encounter with so much Latakia... as I opened the can and took the first wiff... "so THIS is Latakia." After a smoke and taste... reminds me of Cinnamon. Was a nice break from overwhelming rum and maple tastes. Your mileage... Read More my vary. Read Less
Best of Both Worlds!
By: John S.
Product: Sutliff Academy 1.5oz
Best of Both Worlds!