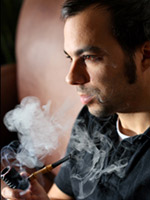 Nasal snuff (powdered tobacco taken through the nose) has been around for centuries. It was first observed by Ramon Pane (a monk) in present-day Haiti during the 1493-1496 voyage of Christopher Columbus. Natives of the Americas were surely using it long before Columbus arrived. Catherine de Medici received some snuff in 1561 to treat her son's migraines and the popularity spread throughout Europe shortly thereafter. By the time the 18th century came around nasal snuff was very popular among the elite and anyone else that could get their hands on it. Because tobacco was so expensive, grinding it to a powder meant it would last quite a bit longer than burning it. Various types of tobaccos were dried and powdered, then sifted, which allowed takers to either pinch or use a little spoon to sharply inhale the powder into their nose. Various aromas –mainly floral- were added.

Coal miners also used snuff because they couldn't smoke their pipes in the mine (due to highly-combustible dust) and because snuffed tobacco causes the mucus membranes to moisten, thus trapping fine dust that the miners would have otherwise inhaled. Mainly, though, snuff was popular because it is enjoyable. Snuff etiquette in the 18th century dictated that you would tap your snuff box and offer some to those around you to take a pinch, sniff sharply, and hold back a sneeze! You can see snuff use in some old movies and in a lot of paintings from the 18th and 19th century. Thomas Edison even filmed a man taking snuff, then sneezing, in 1894.

Snuff manufacturer Fribourg and Treyer was founded in England in 1720. Wilsons of Sharrow also began making snuff in 1737. Both brands continue to produce snuff today (though it is all made at the Sharrow mill). Samuel Gawith began making snuff in 1792, and many other mills opened later in different countries. Napolean was reputed to go through about 15 pounds of snuff a month (though he was also known to just pinch, smell, and let the dust fall). Snuff boxes made of silver, horn, and hard wood in dozens of shapes, along with snuff bottles from the orient have been made to contain a day's supply (around 3-10 grams). These are highly collectible, especially with the increased popularity of snuff in the last 10 years.

So, what does this have to do with us? I began enjoying snuff ten years ago and have tried nearly every variety that was available in the U.S. Ted just recently got into snuff and we've been enjoying some Fribourg & Treyer (French Carotte, Morlaix, Old Paris, etc.).

How difficult it is to make snuff? How cool would it be to make snuff from some tobaccos we have drying out? Not that difficult, actually. Ted and I both enjoy a bowl of Samuel Gawith 1792 Flake and Cob Plug. The aroma in the jar is heavy of tonka bean (somewhat like vanilla, musk, and sweetness). We decided an experiment was in order: Because we love to sniff this blend we decided we’d like to snuff it too. The result is a small batch of Cob Snuff.

We had some Cob Plug that was broken up in fine flakes and leaves that was allowed to dry for a full day. These leaves were then put in a granite mortar and pestle, then pounded and ground in a circular fashion to make a fine powder (which wears out the arms a little - honestly). After several breaks the powder looked rather fine. Taking a piece of cheese cloth, and folding it 3 or 4 times, made for a nice filter. Over a bowl, I put a wire mesh strainer lined with the cheese cloth and poured in the powder, then picked up the cheese cloth bag and shook it over and tapped it against the strainer. Low and behold, a fine powder went through and only small chunks were left behind for discard. After another round in the mortar the snuff was ready to pour into a bottle.

Today I brought in the bottle of Cob Snuff for Ted to try. We both like it quite a bit! It wouldn't surprise me to learn that people have done this for centuries with their dried out tobacco. It was really easy to make and we've already headed down to the store to pick out other blends to turn into snuff. Gawith & Hoggarth Bob's Chocolate Flake is probably next, as is Cannon Plug and some dried out Penzance and Stonehaven that Ted has. We'll let you know how it turns out.