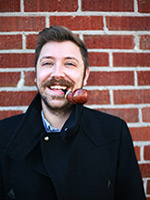 We started selling E. Hoffman's Distinguished Gentleman a couple of weeks ago and since then I've been very intrigued. The tin reads:

An elegant & captivating pipe tobacco comprised of select choice leaf, gently fragrant with an intoxicating aroma. The taste and aroma preferred by men of distinction.

Sounds fancy, doesn't it? Today Eric and I decided to break open a tin and find out for ourselves just what this stuff is all about. All in the name of 'scientific exploration' mind you. Because we are diligent gentlemen, if not distinguished, we took notes. Here are the results:

Distinguished Gentlemen lit up readily, though I hadn't dried it out at all previous to packing it into a decent-sized Luciano bent dublin (chamber roughly 0.8 x 1.7 inches). This was a pleasant surprise, given it comes fairly moist from the tin. The initial flavor was of a distinct yet subtle, sweet, woody, toasted marshmallow character. It was, in fact, considerably more subtle than I expected by the scent of the tobacco in the tin (granted, I rarely smoke aromatics), which is perhaps thanks to the latakia. While the toasted marshmallow flavor quickly recedes, a slight sweetness remained throughout the smoke. The latakia, however, never really made itself noticeable directly. Even some pretty strong puffing failed to produce any "sting" to the flavor, nor any tongue-bite, though I did succeed in making the pipe gurgle more than once. A very mellow blend overall, easy to smoke and innocuous in fragrance to those not partaking (I asked Susan when she passed by). Suitable to its name, I'd say it was a blend with "good manners", i.e. not a sugar-and-gumdrops bomb like some aromatics, and the latakia acting only in a supporting role.

Initially concerned that I had not dried out the tobacco sufficiently (the stuff comes pretty wet) I was surprised how well Distinguished Gentleman stayed lit and how cool it smoked in my corn cob. In addition to the blend’s delightful smoking qualities, I found this rough cut of burley, Virginia, latakia, and Cavendish to work together harmoniously to produce a curiously sweet, yet nutty, flavored smoke, which reminded me at times of toasted amaretto. The latakia was difficult to pin down on the tongue, but could be detected through the nose. Distinguished Gentleman is a very mild, but flavorful cross-over style blend that really came together for me about half-way through the bowl. Good stuff.