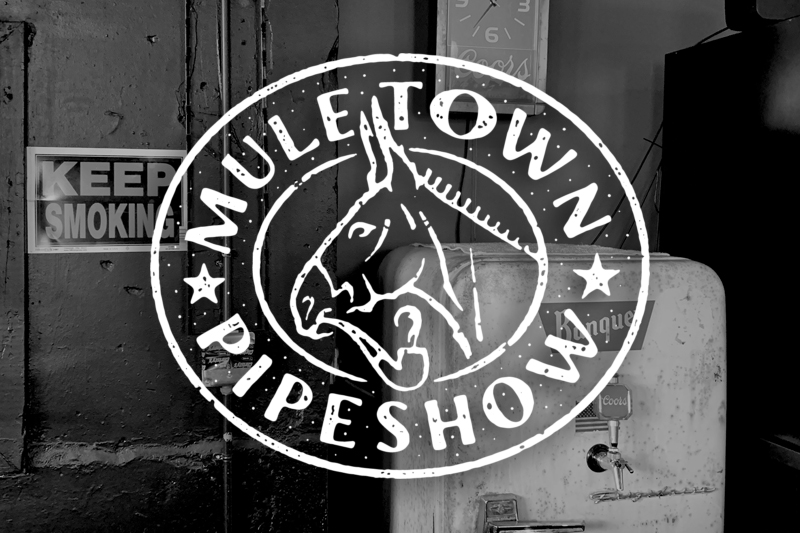 Pipe shows are integral to the pipe-smoking community, and while online gatherings fostered the hobby during pandemic lockdowns and travel restrictions, there are no substitutions for the energy, vibrancy, and unity of in-person pipe shows. Vendors come from all over to sell and showcase everything from pipes and vintage tobaccos to tampers, tools, and other accessories, and patrons travel from just as far not only to chance upon collectibles but to commune with long-time friends and form new, lasting relationships. Hosted in mid-March by BriarWorks in Columbia, Tennessee, the Muletown Pipe Show 2022 marked the end of my pipe-show hiatus since 2019, and I couldn't have been happier.

Multiple components contributed to the Muletown Pipe Show experience, reminding many of the myriad factors that make pipe smoking such an enjoyable hobby. Official, scheduled events like a pipe-finishing showcase by Sam Adebayo of BriarWorks and a tobacco-blending seminar by Jeremy Reeves of Cornell & Diehl, of course, contributed, but just as powerful were the moments in between: those personal moments at every show when we connect with friends, make new acquaintances, and find those elusive pipes and tobaccos that we all appreciate. 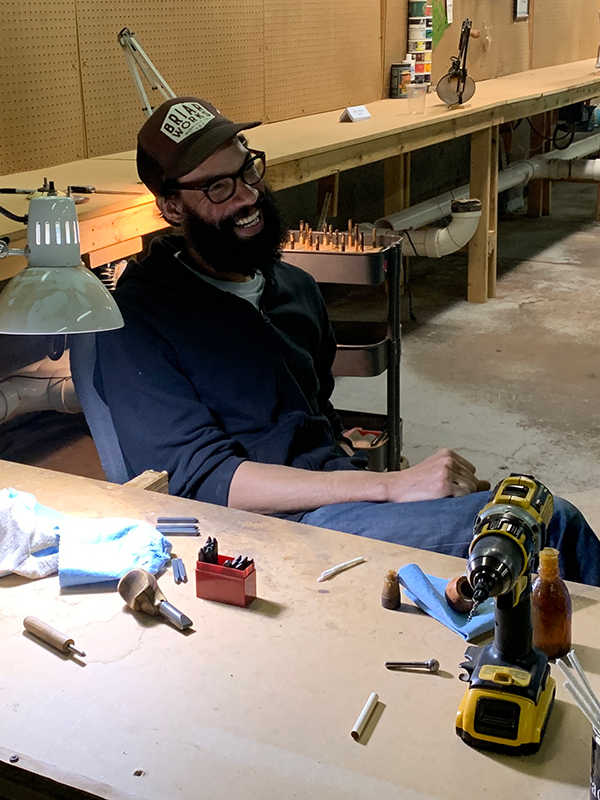 For those unfamiliar with BriarWorks, the workshop fashions pipes under the BriarWorks and Moonshine brands and comprises three craftsmen — Bill Shalosky, Micah Redmond, and Sam Adebayo — led by Pete Prevost. All four men are artisan pipe makers in their own rights, and BriarWorks' production model combines mass-production processes with hand-applied, artisanal techniques. Every BriarWorks and Moonshine stummel is carved on CNC (computer numerical control) machines based on pre-established templates, resulting in consistent shaping evocative of the American factory's signature interpretation of classic shapes, but the stem-fitting and application of stains and finishes are done by hand. The combination results in modestly priced pipes with the engineering and aesthetic quality of handmade work.

The show's festivities began on Friday evening when Sam Adebayo showcased BriarWorks' finishing process, converting a roughed-out Devil Anse stummel into a smoothly polished pipe that was later raffled off to a lucky attendee. While the workshop's CNC machines render well-structured, identifiable shapes, the stummels remain rough and covered in tool markings. Plus, each individual stummel requires a specific stem size. BriarWorks' artisans sand the shanks and stems to ensure a perfectly flush, individual fit, and then sand the stummels at different grits to achieve the workshop's smooth finish, or meticulously sandblast or hand-rusticate the briar to reveal intriguing texture, before oil, stain, and wax are applied. 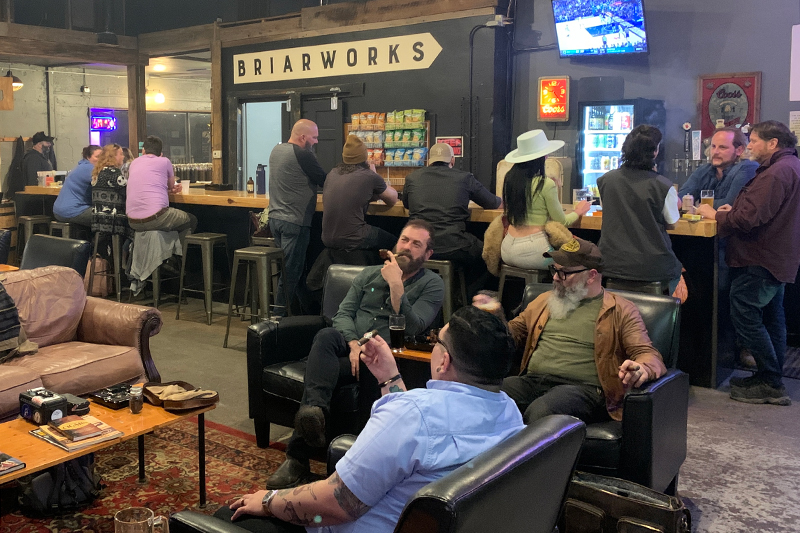 The BriarWorks factory — or Columbia Pipe & Cigar, as the entire space is officially called — is more than a pipe-making workshop. While the back affords a large space for pipe-making equipment and adjoining offices, the front features a chic patio with tables and chairs, and inside houses a comfortable lounge, replete with sofas, armchairs, a full-length bar, dart boards, TVs, and a walk-in cigar humidor. It's a hospitable place that draws pipe smokers, cigar smokers, and non-smokers alike thanks to its authentic atmosphere, inviting amenities, and genuine homeliness, and when weather permits, the full-scale garage door forming the front can be raised for fresh air and increased space.

Most impressive is how BriarWorks' communal space transcends the smoking and non-smoking dichotomy. Pete Prevost explained how often patrons uninitiated in pipes or cigars frequent their lounge, enjoying the bar, watching a game, or throwing darts. BriarWorks even hosts a weekly dart tournament, and it's become a staple event for the locale. Regulars intertwined seamlessly with the throngs of pipe smokers attending the show, and at times, it was easy to forget that an official pipe show had brought people together. It seemed everyone was there simply because of the welcoming environment fostered by BriarWorks.

Moreover, the lounge and workshop are situated just outside of downtown Columbia, Tennessee, a few blocks away from the quaint town square. Great food is mere minutes away; a local brewery sits across the street. The ambiance and space facilitated by BriarWorks alone make it an ideal place for a pipe show, and its location only elevates its idyllic air. 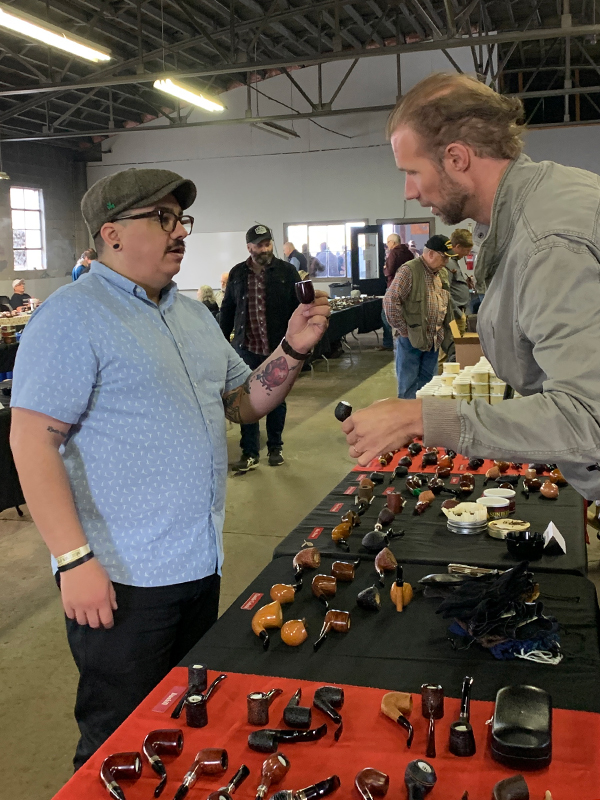 The show floor was open on Saturday and Sunday, with vendors lined across tables on the BriarWorks factory floor, and patrons snaked through the aisles anxious for rare finds, new collection pieces, and elusive tobaccos. While not as large as, say, the Chicago or Las Vegas pipe shows, this year's Muletown show hosted over 300 attendees, surpassing the first year's turnout in 2019. A familiar air of excitement wafted through the room and old friends reunited: Jody Davis and Adam Davidson shared adjoining tables, while a few rows down Steve Norse of Vermont Freehand neighbored Todd Johnson and the "Three Scotts": Scott Klein, Scott Thile, and Scott Tinker. The lattermost Scott had brought an assortment of handmade tampers and tobacco plates, but for much of the show, he caffeinated attendees with his moka pot. He's a Renaissance man; alongside his expertise in woodworking and professional opera, he's a seasoned coffee connoisseur, roasting his own beans and brewing delightful espresso.

One unexpected attendee was Robert Caldwell, founder of Caldwell Cigar Company and co-founder of Lost & Found cigars. He hosted a cigar event in the BriarWorks lounge the night before but also featured a table at the show, selling cigars and also inquiring about pipes. He's collaborating with BriarWorks on a special Lost & Found pipe series with vintage Bakelite stems, and he spent much of the show at the Smokingpipes table, asking about pipe smoking techniques, sampling different tobaccos, and improving his packing process. Cigars and pipes share much in common, but it's always exciting to see those previously associated only with cigars become drawn to pipes. Such shared interest benefits both hobbies, and Robert's intrigue calls to mind Steve Saka, founder of Dunbarton Tobacco & Trust Cigars, his love for pipes, and, specifically, his StillWell Star cigars which incorporate Cornell & Diehl pipe tobacco. While the Muletown show wasn't intended to be a joint pipe-and-cigar affair, Robert's presence and curiosity added to the show's communal nature — thanks in no small part to his quick wit, direct demeanor, and willingness to learn. Hopefully more people follow his example; we need more pipe-smoking cigar aficionados and more cigar-smoking pipe connoisseurs. 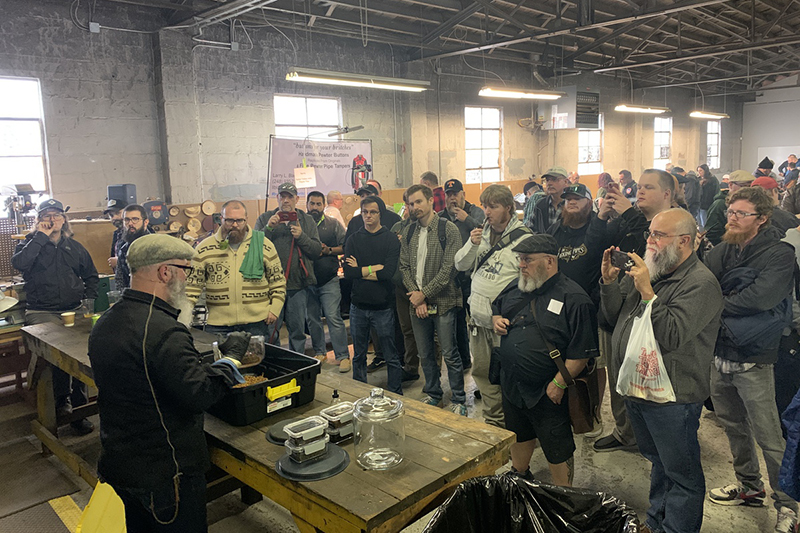 On Saturday, Jeremy Reeves, Head Blender of Cornell & Diehl, led a seminar similar to Sam's pipe-finishing showcase, but about blending pipe tobacco. As for the first Muletown show, C&D handcrafted a special pipe tobacco exclusively for the event: Muletown Mixture. Created by Jeremy, the blend is a Virginia/Perique mélange, comprising primarily Red and Bright Virginias with a touch of St. James Perique and Red-Virginia Cavendish — all topped with subtle aromatic notes. It's not by any means an Aromatic blend, though, the added flavorings more highlighting the Virginias' natural sweetness and adding a sort of pillowy density to the smoke's body.

During the seminar, Jeremy hand-blended a one-pound batch of Muletown Mixture for the audience, offering tips to those interested in home-blending on how best to handle and mix tobaccos and fielding questions about the process. Having a commemorative blend to mark the show added an exciting, exclusive feeling and was a reminder of the special offerings that help make pipe shows all the more special. I'd say the energy and camaraderie are reasons enough, but a one-off blend sweetens the deal.

Plus, it's not every day one has the opportunity to smoke a tobacco with the person who blended it, and pipe shows afford that chance. The same is true for pipes and pipe makers: Pipe shows offer the opportunity for collectors to talk and smoke pipes with the very people responsible for making them, while pipe makers finally have a rare excuse to emerge from their workshops. If anything, we need more pipe shows as fresh air for carvers. 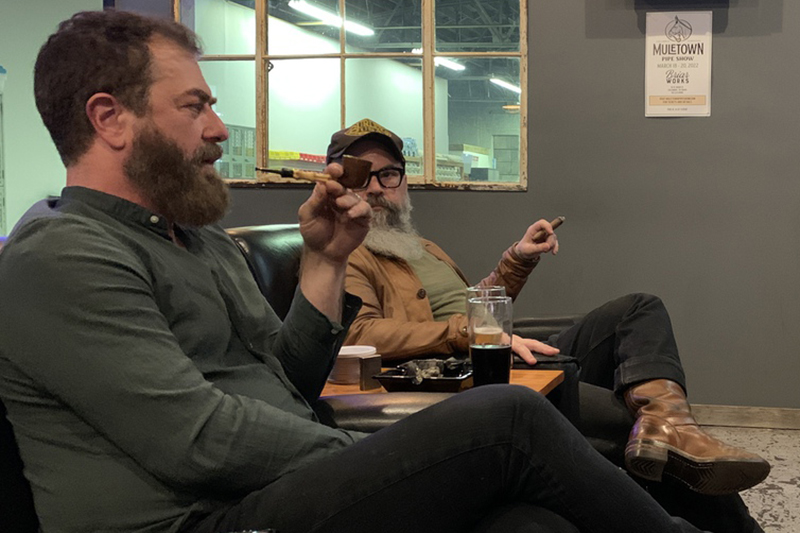 Outside of the show, we spent ample time with pipe makers local to the Nashville area, namely Jody Davis and Todd Johnson. Chuck recently interviewed and wrote an article about Jody and his career, and meeting him in person reinforced the esteem implied by that blog post. Chuck might be a bit biased — he enjoys a number of J. Davis pipes in his regular rotation and plans to be buried with them — but Jody's kind persona and inviting conversation only advanced the reputation that precedes him.

Many of the trip's highlights involved Jody: discussing a recent pair of signature Halo-grade Amore shapes, both made from the same briar block; convincing him to smoke a cigar and, better yet, him enjoying it; and having dinner with him and his wife. He wasn't merely there to sell pipes (although he definitely did that); he's truly invested in the community. I was struck by the fact that the pipe-smoking hobby consists not only of pipe smokers who buy pipes from makers, but that the makers are as much members of and investors in the community as the collectors themselves. Pipe shows truly highlight that relational aspect. 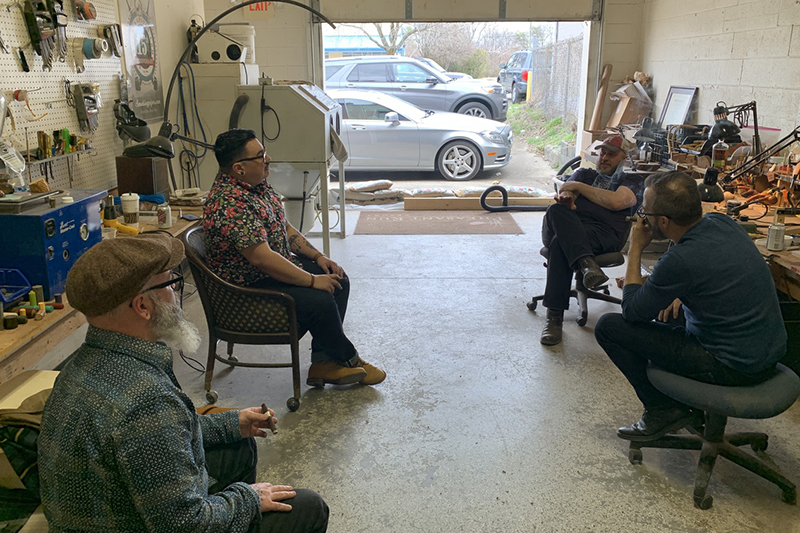 Shane, Jeremy, and I also spent an afternoon with Todd Johnson and Adam Davidson in Todd's workshop. Adam isn't a Tennessee local, but he stayed at Todd's for the show. Like most times spent in a pipe maker's workshop, we reflected on past pipe shows, swapped comedic stories, discussed pipe design, smoked, and, of course, watched the artisans do what they do best. With two pipe makers in the same workshop, it's rare for pipe making not to turn into some sort of competition. Todd committed to shaping a Blowfish on the sanding wheel as quickly as possible, and Adam, not to be outdone, aspired to do the same but with an impossibly thin scrap of briar. One could argue that Todd's results were more practical, smoking-wise, but Adam maintaining all of his finger tips is perhaps most impressive.

On the topic of finger tips: One thing I noticed when talking and spending time with these various pipe makers — Jody, Todd, Adam, Pete, Micah, Bill, Sam, Scott — was how intentional their hand gestures were while speaking. I'm not saying pipe makers gesticulate more than you or I, but their hand movements appear more measured and precise, as if performed with greater control. I imagine it's all subconscious for them, but through pipe making, they've honed and developed incredible control and precision — something evident whenever their hands move, even when not making a pipe. Next time you're conversing with a seasoned pipe maker, notice their hand gestures and see if that observation holds true. Just don't make my mistake and fixate on them too awkwardly; they're hands, not lobster claws. 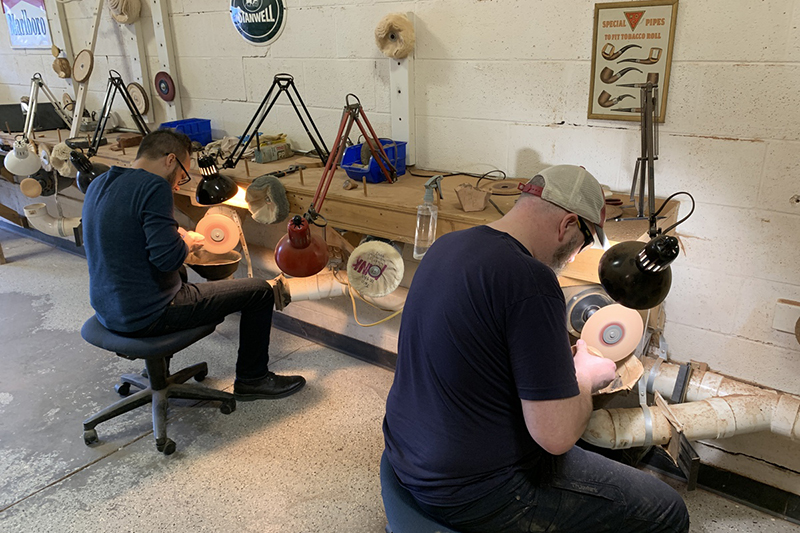 Perhaps most of all, the Muletown Pipe Show 2022 was something of a status check on the pipe community, a proverbial finger to the pulse of the industry. It was one of the first post-lockdown pipe shows, and I'm happy to report that the state of the union looks good. Apart from more vendors and more attendees, nothing could've made the show any better, and considering the growth compared to 2019's show, it stands to reason that next year's Muletown show will see similarly increased numbers.

We hope to see you in Chicago at the end of May. We're lucky to be involved in a hobby with such devoted participants, and nowhere is that more evident than at pipe shows. 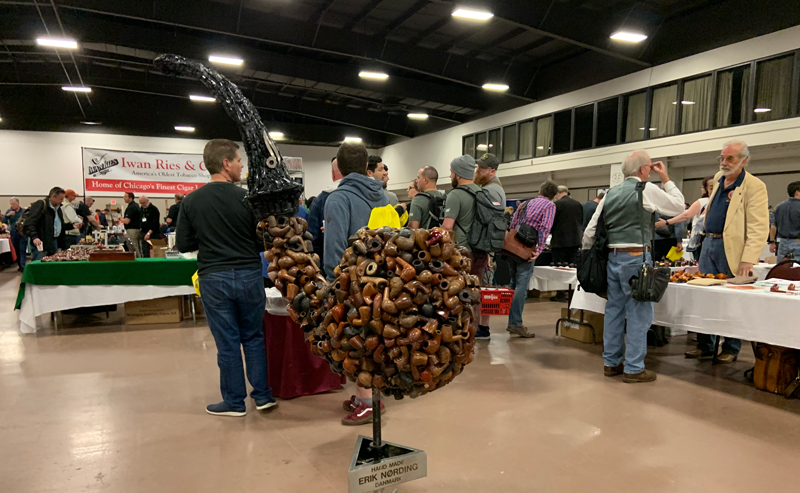 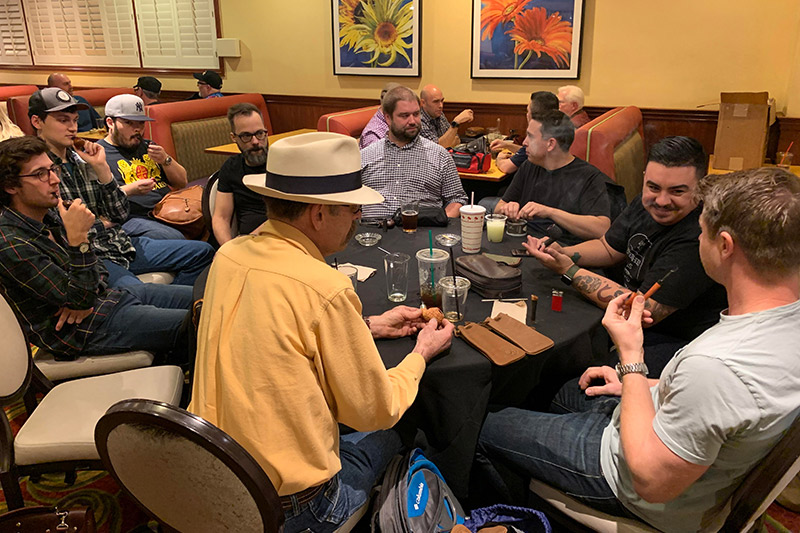 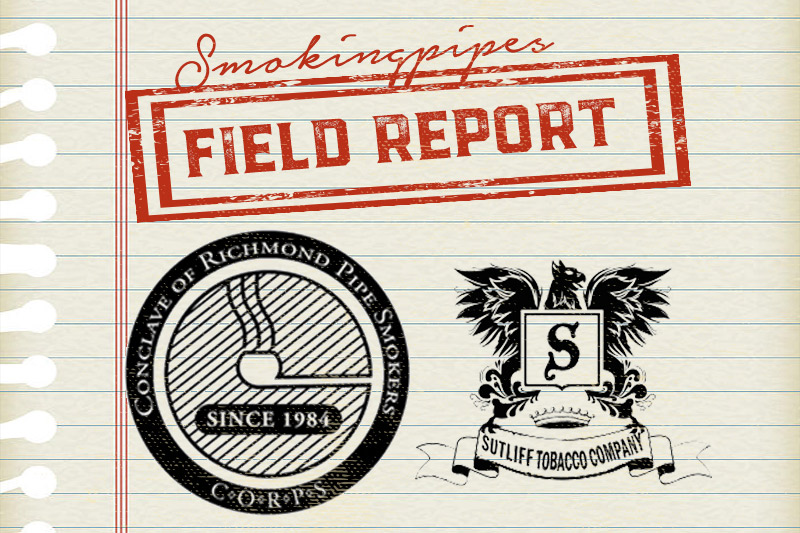