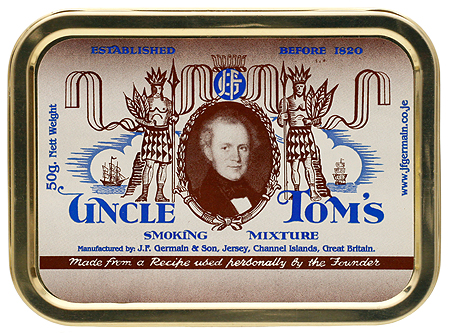 Customer Reviews (4 Total)
Write A Review
Write a review
Overall Rating:
3.63 out of 5 stars
bad
By: Trump D.
Product: Germain Uncle Tom's 50g
I managed to get a a hold of a 3 year old tin, on which this review is based. Upon opening opening it, there was something in the tin aroma reminiscent of vomit, like others mentioned. Though this faded away after a few days of being opened. After wh... Read More ich all one is left with is the smell of latakia. Flavorwise, to me this was rather one note with latakia predominent. None of the sweetness of the cavendish or virginias came through. If I was not told there was perique present I would never have guessed it. Also the orientals were drowned out by the latakia. Also it smoked wet for an english/scottish blend. It is a decent latakia blend, though I probably won't buy it again. Full flavored but very one dimensional. Read Less
Surprise
By: Ian R.
Product: Germain Uncle Tom's 50g
Of course not surprised, it's a Germain
What he said
By: M. Scott
Product: Germain Uncle Tom's 50g
I have to agree with a previous review that James W. posted. This is some good stuff and best of all NO BITE!!!
Good Tobacco
By: James W.
Product: Germain Uncle Tom's 50g
Uncle Tom's is described as 'An old fashioned style with a subtle aroma and mild taste'. Dead on description in my opinion. If I were to imagine what an 'old fashioned' tobacco would look and taste like, this would be it (if that makes sense). Moistu... Read More re content is just right. The look of the tobacco is almost comical (in a good way), since it has so many different shades of tobacco in it. If you are looking for a mild aromatic, perhaps an occasional switch from what you are used to smoking, give it a try. Pretty good stuff. Read Less