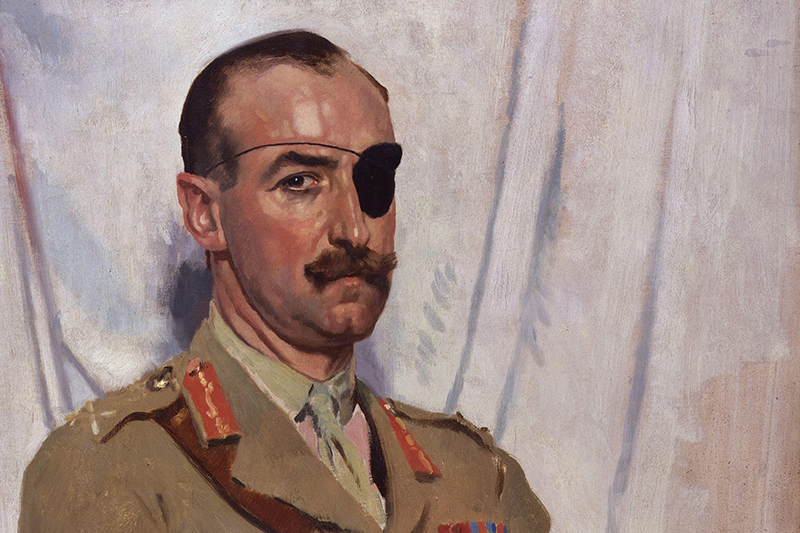 We know nothing about his pipe smoking or about his preferences for tobacco or pipe shapes, but we know he smoked pipes because he's seen in photos doing so. That makes Sir Adrian Carton de Wiart one of us.

I discovered him by curiously Googling "tough guy pipe smokers," which, disappointingly, did not reveal him, though it did mention Edward G. Robinson, who was tough when on film. I was looking for real life tough guys, though, and they're remembered for their exploits rather than for their pipes. But if you Google "historical tough guys," you'll find Carton de Wiart on nearly every list. Pipe smokers are more often considered thoughtful and measured and are seldom labeled tough, but when they are, their pipe smoking is overshadowed by their impressive badassery.

We know nothing about his pipe smoking or about his preferences for tobacco or pipe shapes, but we know he smoked pipes because he's seen in photos doing so.

Many consider Genghis Khan the most impressively tough guy of all time, but he was no pipe smoker. He conquered the world, though, or as close as he could, and left some tough guy quotes behind, such as, "The greatest happiness is to vanquish your enemies, to chase them before you, to rob them of their wealth, to see those dear to them bathed in tears, to clasp to your bosom their wives and daughters." He also said, "I am the flail of God. Had you not created great sins, God would not have sent a punishment like me upon you." If he'd smoked a pipe, he might have attenuated that enthusiasm for mass murder. He needed to calm down. There's no telling what positive contributions a guy like that could have accomplished with a Billiard and some Luxury Navy Flake. 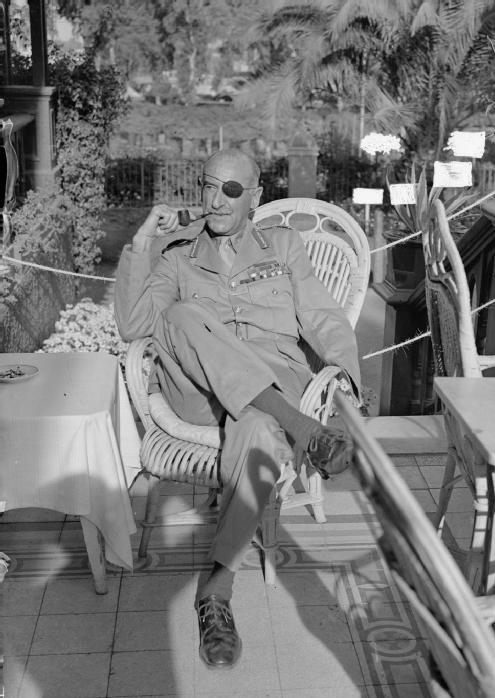 Carton de Wiart, however, was a modern warrior. He fought in the Second Boer War, WWI, and WWII, survived two plane crashes, and was wounded 11 times. Born in 1880, in Brussels, Belgium, to a wealthy, aristocratic family, he did not pursue a life of luxury. That would have been too easy. That would have been what most anyone else would do. At 19 years old he left his law studies at Oxford, lied about his age, used a fake name (Trooper Carton), and enlisted in the British army a year before he was age eligible. It was 1899 and he was soon in South Africa fighting in the Second Boer War, where he was shot during combat in the groin and the stomach and sent home to convalesce.

That was when his father discovered that his son had discontinued his Oxford studies to enlist, and he was angry, but finally acquiesced to Adrian's military career. As Carton de Wiart recuperated from his wounds, he resumed his studies at Oxford, but soon withdrew after securing a commission as a second lieutenant, now under his own name, in the Second Imperial Light Horse in 1901, and in 1904 he became a first lieutenant in the Royal Dragoon Guards.

His wounds motivated him to pursue physical fitness, and he ran and played sports to keep himself fit. He became a British subject in 1907, having already served in the British army for 8 years. Most people found him to be an engaging person, pleasant company, and a fluent and continuous speaker of obscenities that made an impression wherever he went. All of his adult life he was known for his abundant employment of profanity. Given the amount of scar tissue and shrapnel he carried with him, that's little surprise. But he remained jovial and was an engaging and interesting conversationalist.

In 1914, when World War I began, Carton de Wiart was already busy suppressing uprisings in British Somaliland, serving with the Somaliland Camel Corps. He was often in skirmishes with the Dervishes, led by the "Mad Mullah," Mohammed Abdullah Hassan, and during one of these battles he was shot. Three times. Once in the arm and twice in the face. He lost part of an ear and his left eye, and for his courage in action received the Distinguished Service Order.

Most people found him to be an engaging person, pleasant company, and a fluent and continuous speaker of obscenities that made an impression wherever he went.

He was given an artificial eye but found it uncomfortable, wearing it only long enough to convince the medical board that he was fit for combat, and then he threw it out of a taxicab window, opting for a black eye patch instead, which he wore for the rest of his life. The patch perfectly matched his adventurous lifestyle.

In 1915, Carton de Wiart was sent to the Western Front with the 4th Royal Irish Dragoon Guards, finding himself in battle on his first night when the Germans were launching artillery as his regiment was relieving an infantry unit. During that attack, his left hand was mangled by an explosion, leaving only two fingers intact. He was impatient with the doctor, who refused to amputate those remaining fingers. But they were distracting, and much to the doctor's horror, Carton de Wiart tore them off. That bears repeating: He tore off his own fingers. Some reports say he bit them off. Either way, he discarded them as irritants, much as he had pitched his artificial eye. He was more comfortable without them, and his mangled hand was removed by a surgeon later that year. 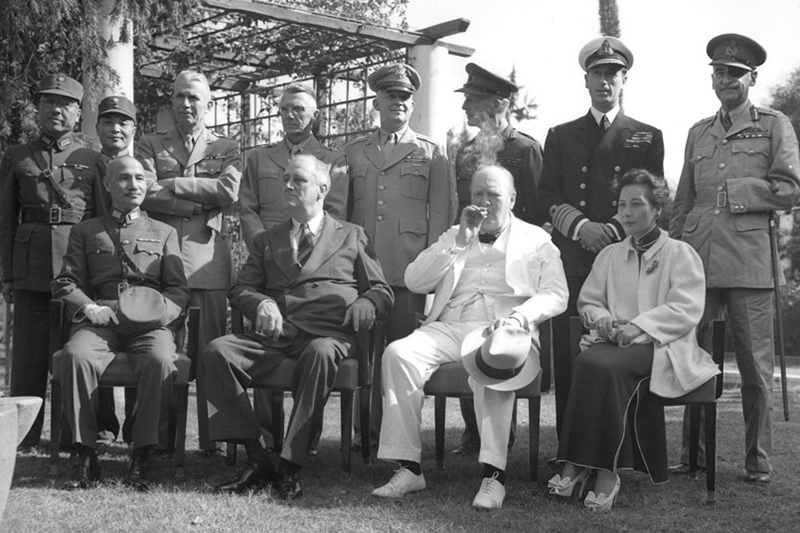 Now with one eye, one hand, and one undamaged ear, Carton de Wiart again convinced the medical board that he was fit for combat. In France, at the Battle of Somme, he was in command of a regiment ordered to take a particularly well-fortified German position at the village of La Boisselle. When the commanders of three other regiments fell in the battle, he took command of all four and broke the German line of defense, helping in large part to take the position. He demonstrated such courage in battle (he was seen pulling grenade pins with his teeth and lobbing them at the enemy with his one arm) and inspired his men to such a degree that he was awarded the Victoria Cross, the highest British award for gallantry in action.

Before the end of the war, Carton de Wiart was wounded a few more times, always returning to the front, and received promotions up to the rank of temporary brigadier general. He is famously quoted about his experiences in WWI: "Frankly, I had enjoyed the war."

After the war, he was posted to Poland as commander of British forces, and he lived there and enjoyed fishing and hunting, as well as helping Poland repel attacks from various other countries, such as Russia, Ukraine, Lithuania, and Czechoslovakia. He retired with the rank of major general in 1923 and continued living in Poland. 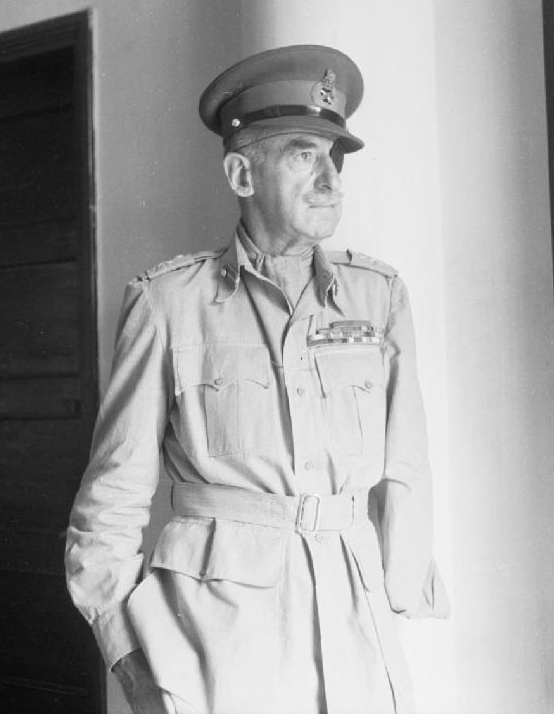 Then WWII began. He was 60 years old in 1939 when he was recalled to his former post in Poland but was soon required to retreat when the Soviets, who were aligned against Poland at the time with Germany, invaded the country. He lost his home but was particularly perturbed that he lost his guns, rifles, and fishing rods. He escaped to the Romanian border with both the Russians and the Germans in pursuit, and his convoy was strafed by the Luftwaffe, killing one. Romania was no safer for him, however, and he escaped using a fake passport.

He pursued many adventures during the war, from Norway, to Northern Ireland, to Yugoslavia. In 1941 his plane was shot down into the ocean about a mile from the coast of Libya, which was controlled by Italy. He was knocked unconscious in the crash but awoke and swam to shore with the rest of those on the plane, where they were all arrested. Carton de Wiart spent the next two years as a POW, spending seven months constructing an escape tunnel and making five escape attempts, evading authorities on one occasion for eight days before his rearrest. It was probably difficult for a one-eyed, one-handed man to maintain anonymity for long. A few days before he was rearrested, paperwork arrived granting him repatriation because he was disabled, but his escape negated that gesture. In August, 1943, however, the Italian government approached him with a plan, wanting him to inquire on its behalf about a peace treaty. An Italian negotiator accompanied him, and he helped secretly negotiate an Italian surrender with Allied representatives in Lisbon.

He then returned to England, where he was summoned almost immediately by Winston Churchill. He was granted the rank of lieutenant general and sent to China, which was agitating for the return of Hong Kong, to act as Churchill's personal representative. He did that for three years. Chinese Generalissimo Chiang Kai-Shek, the leader of China from 1928-1949, offered Carton de Wiart a job before he left, which he declined. He finally retired in 1947 at the age of 66.

During the trip home, he tripped at the top of a flight of stairs and fell, breaking his back in two places. Since the doctors had him open anyway, they removed a frightening amount of shrapnel, and Carton de Wiart recovered, more comfortable than before.

For a man who discarded body parts and homes so easily, it's hard to imagine what sort of value he would place on his pipes, other than as smoking appliances, though he seems to have had an important relationship with his firearms and fishing rods, so maybe his pipes were important to him as well.

His wife died in 1949. He didn't mention her in his autobiography, Happy Odyssey, but he didn't mention that he'd received the Victoria Cross either. That story was about being a soldier, and wives and commendations were not part of that story for him.

He married again when he was 71, to a woman 23 years younger, and lived with her in Ireland, where he enjoyed fishing and bird shooting until his death at age 83.

I wish there was some information on his pipe smoking, but there is not. However, for a man who discarded body parts and homes so easily, it's hard to imagine what sort of value he would place on his pipes, other than as smoking appliances, though he seems to have had an important relationship with his firearms and fishing rods, so maybe his pipes were important to him as well. We just don't know. But we do know he smoked them, and we all like to discover interesting, pipe smoking, historical figures. As for being an historical figure, Carton de Wiart is among the most intriguing. A born warrior, a diplomat, a courageous role model, and a pipe smoker, he continues to fill modern imaginations with his exploits. 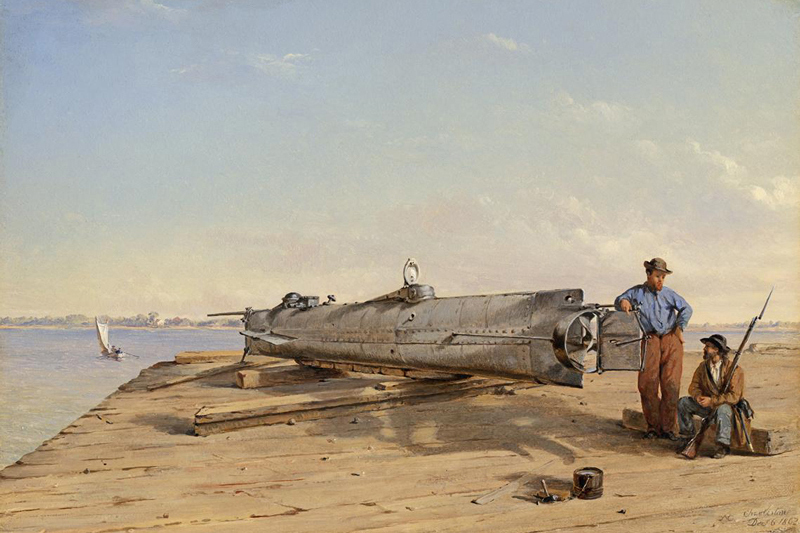 The History and Recovery of the H.L. Hunley 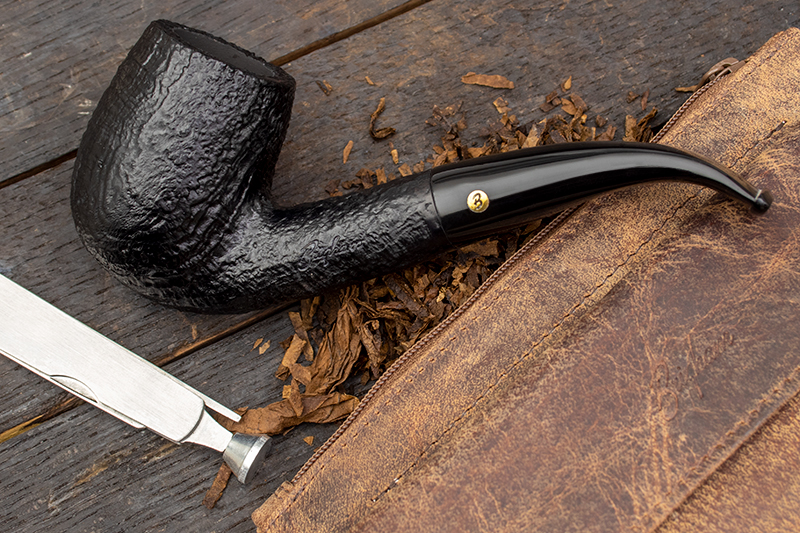 The History Of Brigham Pipes 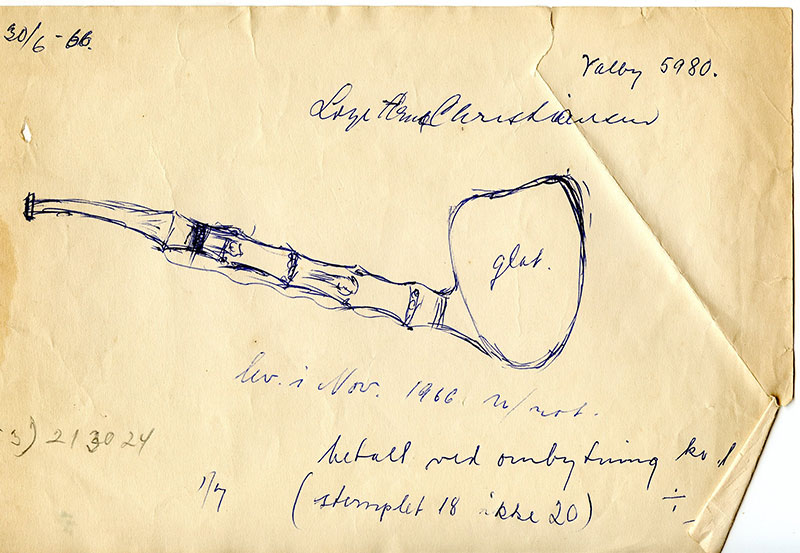 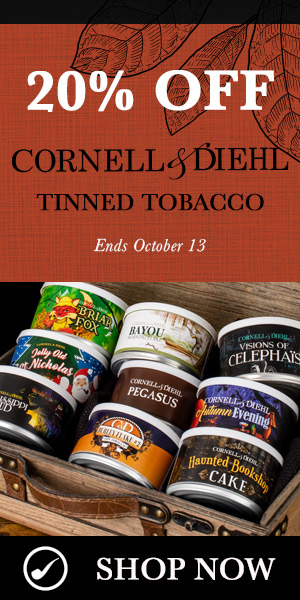