February 13, 2020 by Shane Ireland in Makers and Artists

On this episode of All Pipes Considered, Truett and I sit down to discuss three outstanding new pipes from our very own Adam Davidson, each embodying a unique, retro style. Over the years, Adam has created such a breath of signature shapes, balancing the line between paying homage to tradition and innovating for the future. These three pieces represent that balance beautifully. Tune in for a detailed breakdown of each pipe, plus commentary on Adam's overall aesthetic.

Fan of a Adam Davidson's work? Feel free to share your thoughts and experiences in the comments below.

[Truett Smith]: Welcome to another episode of "All Pipes Considered." Today we're talking about Adam Davidson, specifically the three pieces that we've gotten most recently from him.

[Shane Ireland]: This batch in particular is kind of a nice snapshot of three distinct retro styles that Adam has been playing with recently. It got me thinking about his body of work as a pipe maker overall. Adam has a disposition, I guess you could say, towards innovation. He has come up with quite a few shapes that we would consider signatures of his.

[TS]: And that's not just in pipe making either. He studied industrial design, and he loves experimenting with food and cuisine. It's kind of a part of who he is and it's obviously evident in his pipe making.

[SI]: Absolutely. Even earlier in his career, too, he was making a handful of designs and playing with themes that were really sort of far-reaching in their influence among American pipe makers at that time. The Fig is a good example; it's a design that Adam came up with that we've seen countless people riff on since then. And the thing that's brilliant about that particular design is the space that he has to play around with and how he can tweak it. He's done things with bamboo, things with horn, small, large, asymmetric, less asymmetric, all kinds of different variations on the same shape. Same thing goes for his Amoeba, his Almond shape, really just a ton of them. So, I got to thinking about that, and in my opinion, Adam's work is equal parts homage and innovation. He plays with and pays tribute to his influences, which are quite varied and spread out — everything from turn of the century French and English pipes to the pipe I'm smoking, which was made in Toku's shop. This pipe was made in Japan while Adam was visiting Tokutomi, I think, in 2014.

[TS]: And so homage, not only to specific carvers but even to just older styles. As another example, we can think of his Lorraine, clearly an homage to turn of the century French and English pipes, something like that. 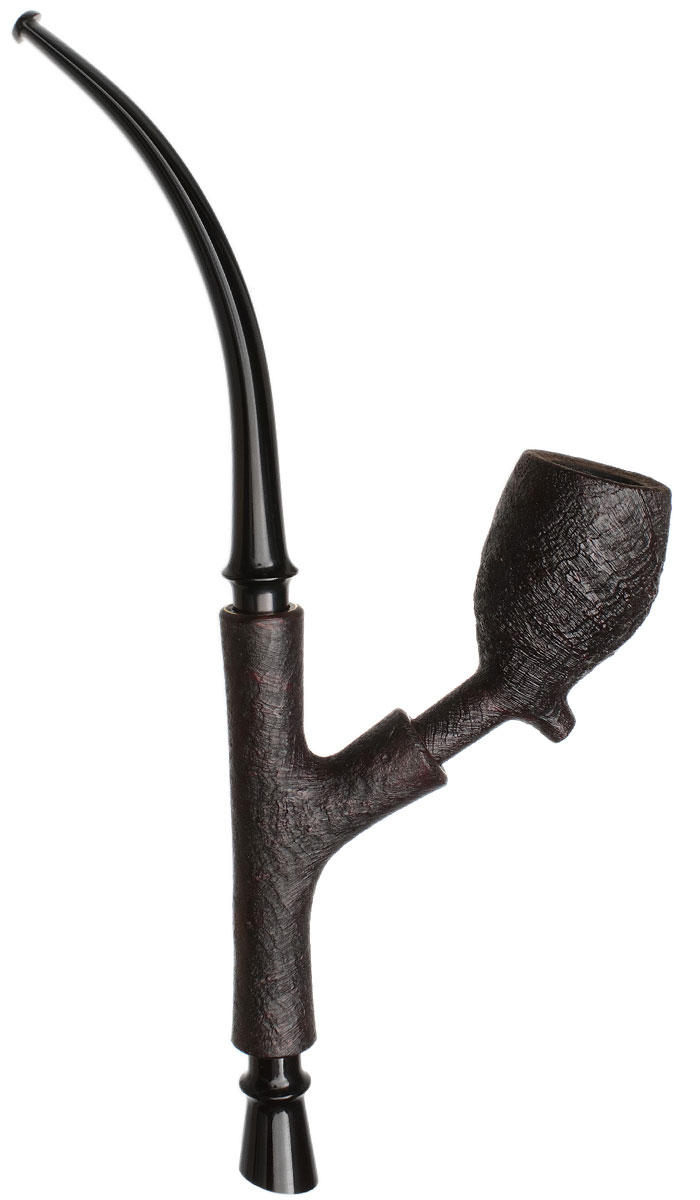 [SI]: And he's made a ton of them. On the other hand, you have something like this, which is sort of Adam's take on a shape designed by Jørn Micke. So, a really old school kind of 60s and 70s Danish freehand shape, and he's been playing a lot with that lately. At the same time, he's been making a ton of these Cavaliers, too.

[TS]: Which goes back to like, old German hunting pipes.

[SI]: Yeah, old German hunting pipes kind of stuff. It's a traditional, fully functional Cavalier; the foot is removable and it's all connected drilling wise.

[TS]: Yes, it's technically four different pieces if you count the stem. And fun fact: he drills all of these the same diameter, so technically, you could put the bowl here and the stem here and the cap here, whatever which way, but traditionally, this is obviously how it would look.

[SI]: Absolutely, all sandblasted briar as opposed to porcelain and other hardwoods and stuff like that.

[TS]: Which would have been the vintage way of doing it.

[SI]: So, kind of a modern take on like a very old-school design. And also to the Cutty foot on that bowl, too. Even the Fig is inspired by the Cutty, the old Tavern pipes. So it's kind of a full circle thing for Adam in that sense. And then lastly, we have a Billiard, straight and less seemingly unassuming straight Billiard. However, you'll notice that the stem and the mount the faux army mount are made of briar. Not only are they made of briar, it's actually entirely one piece of briar. You see briar stems in early turn of the century French pipes. We've seen some of that come back too, and a lot of guys have riffed on that with various shapes. The interesting thing about this one, for me, is not only the contrast and texture between the smooth rounded army mount and stem and the sandblasted bowl, but Adam's gone to pretty extreme lengths to make you believe that you could remove the stem.

[TS]: It's kind of, yeah, freaky. Whenever I get a pipe, one of my first instincts is examine the tenon and just like check out the engineering and admire it and everything. So I pick up this pipe, and I know it's all briar, I know it doesn't come apart, but my first instinct is still to tug on the mouthpiece a little bit so...

[SI]: But aside from the way he's turned that faux army mount and stem, he's actually taken an X-Acto knife and made very, very fine cuts.

[SI]: And just a beautiful pipe overall on the natural side; I believe that's just an oil finish. It's more modern in its proportions, and I think that's really an interesting juxtaposition too: The all briar pipe or the briar stem is a pretty old-school kind of idea, but he's done it on a pipe that is otherwise pretty modern in profile and in proportion. So, even though Adam has consistently sort of contributed to and even shaken up the modern pipe sort of world (just think about some of his contributions to our annual American Carving Contest, there are a handful of pieces that are sort of hard to ignore, most notably, in my opinion, was last year's contribution to the bamboo theme, which was the Almond with the triple bamboo shank.

[SI]: Just really, really interesting takes and interesting innovations in both craft and design as a pipe maker. But when you look at his body of work going back his whole career too, there are also these kind of waves of him experimenting with different vintage styles. Even earlier on in his career, you can see him playing a lot with retro Danish sort of stuff as well, while still making a lot of Cutties and old-school kind of Tavern pipes.

[TS]: Now, was he making this specific shape for Micke or is that a more recent thing?

[SI]: I think that is a more recent thing. But there's there's definitely some Sixten inspired stuff earlier on. And just a lot of stuff that looks like it would have been right at home in a window of a pipe shop in Copenhagen back in the day. But like I said, sort of all along, he's been just as interested in turn of the century, really early English and French stuff. For example, the Cutty and the Tavern pipe are themes that he's played with over and over again throughout his career. So it's always been interesting to me to see the sort of like parallel, I guess: He's chasing two things at once. One of them is coming up with something that's completely new and different, and the other one is paying tribute to and improving designs that are time-tested.

[SI]: A very well balanced body of work and definitely no shortage of surprises from Adam as well. But we just thought that this particular snapshot of pipes was a really interesting assortment of pieces that have a definite vintage feel to them with a modern execution.

[TS]: All right so check out our selection of Adam Davidson pipes on site right now and we'll see you next time.

[SI]: Thanks Adam and thanks for watching guys. 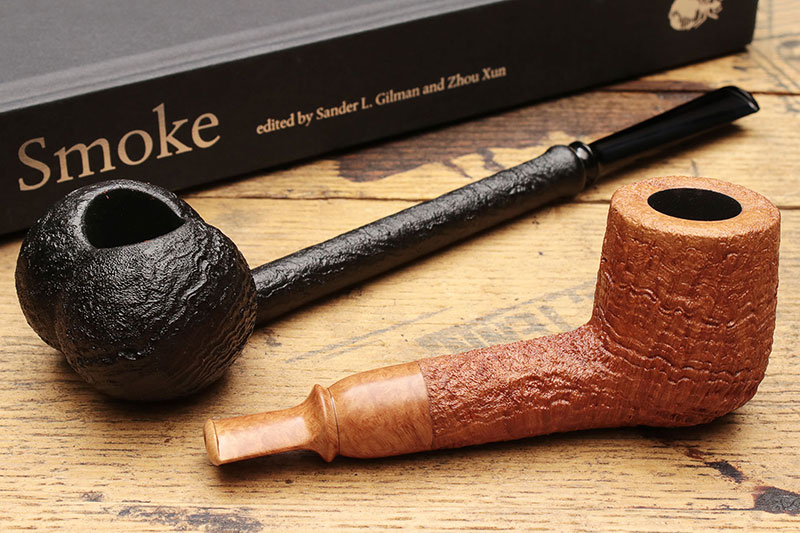 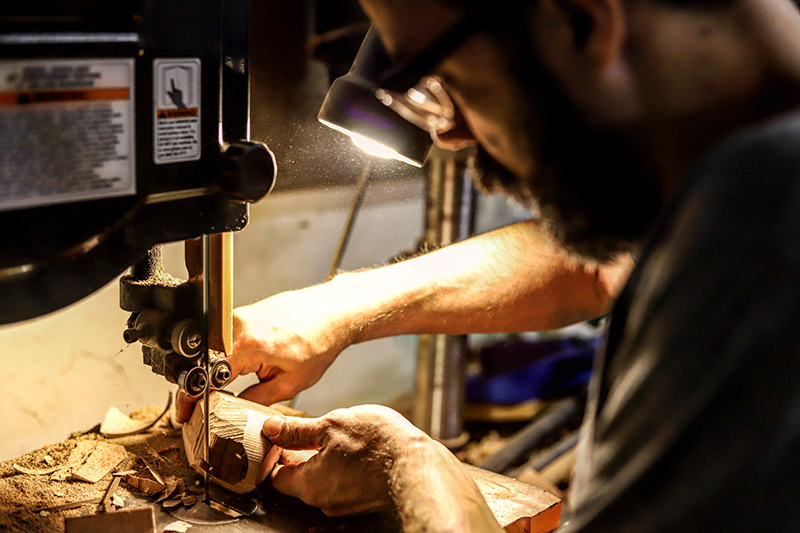 Sunday In The Workshop With Adam Davidson 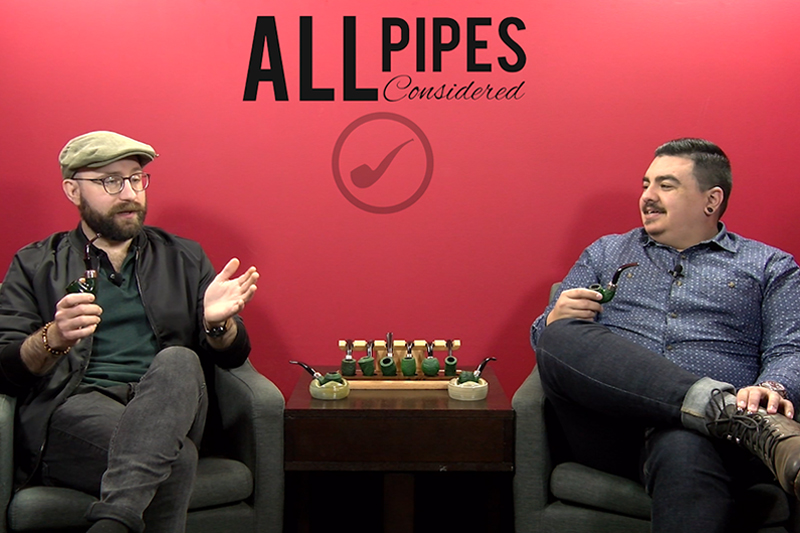 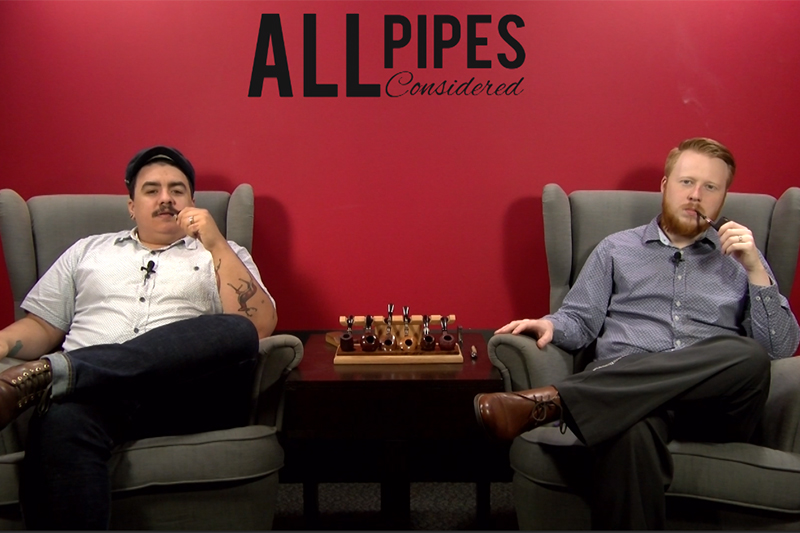