The Zeppelin blend by Vauen is essentially an aromatic mixture spiced up with a bit of Latakia in the background, producing both sweet and more savory notes.
Strength:
Room Note:
Taste: 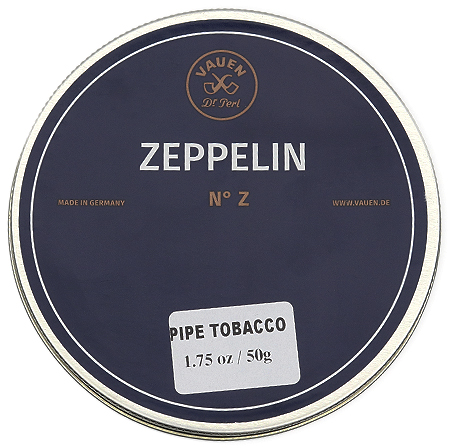 Customer Reviews (5 Total)
Write A Review
Write a review
Overall Rating:
3.90 out of 5 stars
traded up
By: shakeycoyote
Product: Vauen Zeppelin 50g
Had purchased the Jubilee some time ago and it was too much fruit so a trade was made with a fellow Jarhead and walah I found this blend to be much more my speed. I may have grown away from aromatics more lately and finding I like the flavor more tow... Read More ard coffee or vanillas and whiskey and not the fruits, Read Less
Oh, the humanity!
By: Robert H.
Product: Vauen Zeppelin 50g
My first thought was that this was a tobacco that would not need to be relit. Once lit, there was no stopping it. Dark humor aside, I enjoy the German aromatics. The flavors are a bit more subtle. I will keep a couple tins to sample from time to time... Read More , but it isn't anything special. Read Less
Pleasant smoke.
By: Michael S.
Product: Vauen Zeppelin 50g
How does anyone get into these tins? This is the second tin that I have had to destroy to get the damned thing open, won't purchase another tin! Pleasant aroma and taste, and I enjoyed it very much, but goog god, I have never had so much trouble gett... Read More ing to the tobacco! NO MORE TINS! Read Less
Led Zeppelin jokes aside, this is a classic blend.
By: Smokebacca
Product: Vauen Zeppelin 50g
I have been happy with every Vauen tobacco I've ever bought. Zeppelin, or “No. Z” as they label the tin, is no exception. I'm not sure why they would want to name such a great medium English blend “Zeppelin” but I think it has more to do with the nob... Read More le family name than the Hindenburg disaster or English classic rock legends Led Zeppelin. Fact is, this would be a good tobacco no matter what name you gave it. It is a classic in its own rite with a well balanced blend of Latakia, Virginia, Burley and a touch of Black Cavendish. The Virginia and Latakia hold the center stage with the Burley adding support with the Black Cavendish almost lost in the mix. Some reviews claim this is a sweet English-aromatic blend, but I don't think so (try Vauen's English Blend No. 22 for that). It may be on the light to medium scale, but it is an English blend. In fact, I'm not certain that they use a sweetened Cavendish here. What little sweetness I get seems to be more from the Latakia and Virginia working so well together. The flavor is definitely more smokey than sweet. The Latakia and (Kentucky?) Burley produce that barbecue bouquet, albeit on the light side (it's not like Three Nuns strong). The cut, packing, lighting...all fairly standard. This isn't a top shelf English blend, but easily could be an all-day, EDC. If I had to think of another blend this reminds me of, I'd say Presbyterian. While Presbyterian has a little more going on with the orientals, they have a similar anytime appeal in strength and flavor. Zeppelin should please any English fans. As long as you're not hoping for a Latakia overload, this should do you fine. Enjoy. Read Less
Led Zeppelin Un-Led-Ed
By: Walter-Neff
Product: Vauen Zeppelin 50g
Totally first rate blend in every way.