Welcome back to another episode of Smoke Rings. In this installment, I had the pleasure of sitting down with James Shores, our Territory Rep for Ashton Cigar Company. Tune in as we talk a little bit about how James got into the industry and take a deep dive into Ashton's expansive portfolio of high-quality Nicaraguan and Dominican cigars, including popular brands like La Aroma de Cuba and San Cristobal. Any Ashton fans out there? Feel free to share your thoughts and experiences in the comments below.

[Tim Vanderpool]: Hello, everyone! Welcome to another episode of Smoke Rings. I'm Tim Vanderpool, the cigar specialist for smokingpipes. Today, I have with me Mr. James Shores. James is the Territory Rep for Ashton Cigars. Part of the idea behind Smoke Rings is to give people a chance to get to know the reps, because the reps move the product. You're the workhorses of the industry. So, with that being said, your name's James Shores. Where are you from?

[T.V.]: For those of you who didn't know, I used to be the Territory Rep for Ashton in this area. James came on after me in the same territory. So I know that part, but how did you get into the business in general? And then, how did you become a rep?

[J.S.]: Well, I started working at the local tobacco shop that my grandfather used to go to: Sweetbriar Smoke Shop in Columbus, Georgia. It's been there for 45 years. It's the oldest, still, family owned tobacco shop in Georgia. It's a fantastic spot. If you ever get a change to go to Columbus, Georgia, go check it out. But a position became open for Ashton, I applied, and got the job.

[T.V.]: Simple enough. So, what territory do you cover?

[J.S.]: I cover Eastern Tennessee, North Carolina, South Carolina, and I dip into Augusta and Savannah. And that's just because of how things kind of lay out.

[T.V.]: Okay. So, let's talk a little bit about the cigars. Again, since I worked for them for a while, I kind of have a pretty good working knowledge of the organization. Ashton distributors, Ashton cigar companies, are basically has broken up into two separate divisions, more or less. We have the Dominican side, and a Nicaraguan side. Correct?

[T.V.]: The Garcias make My Father's cigars, Flor de las Antillas, all those things, too. If people aren't familiar with them, they're among the top Nicaraguan cigar producers and one of the, if the top, Dominican producer as well.

[J.S.]: That's right, that's right. And they're both fantastic partners.

[T.V.]: That's awesome. And, you know, I smoked plenty of their cigars, both before I got in to the rep world and now, as the cigar specialist for Smokingpipes. And they don't really make a bad product. 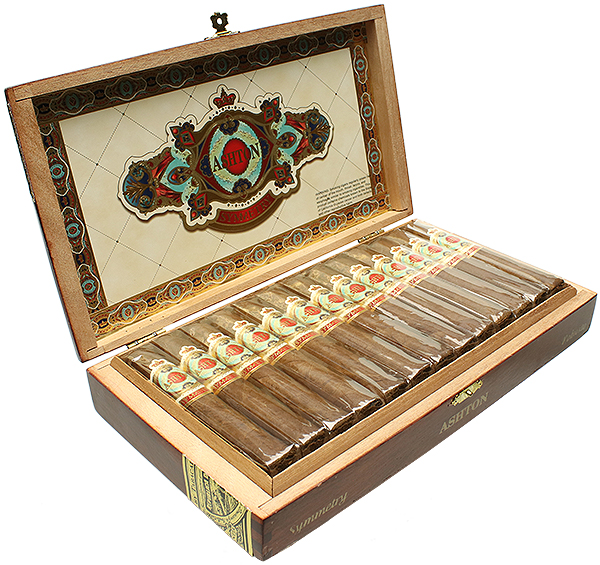 [J.S.]: Except for the Symmetry. The Symmetry's the first cigar we had on the Dominican side to be blended with Nicaraguan and Dominican filler and binder.

[T.V.]: And these are the things I picked up working for the company. This is the first cigar to ever use 50% Dominican and 50% Nicaraguan filler. Outside wrapper is Ecuadorian Habano. This is probably my go-to cigar, when I want an Ashton. Until this came out, it was the VSG. The VSG's phenomenal. It used to be considered a full-bodied cigar when it first came out. And then, so many other full-bodied cigars hit the market and that trend got bigger and bigger. Everyone assumed that the blend got changed in the VSG.

[J.S.]: No, it's just everybody came out with a more powerful and stronger cigars. I still would consider it full-bodied, but as far as strength, I would consider it more of a medium to a medium plus. But, you know? Every bodies palate is different.

[T.V.]: Every ones, yeah. To each their own. And they're all regular production lines. The Ashton Classic is the mainstay. It's the first cigar the Levins came out with.

[J.S.]: Right, and it's usually the first cigar most people smoke.

[T.V.]: And I believe the Ashton Churchill might still be considered the number one golf course cigar.

[J.S.]: It is still the number one golf course cigar, it's still our number one sku. 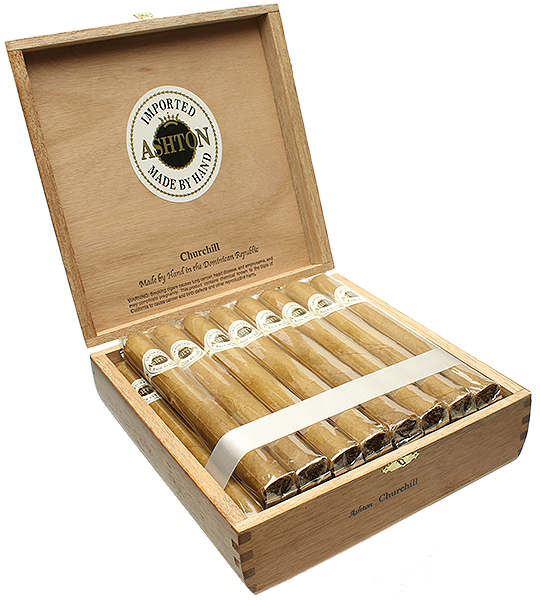 [T.V.]: And it's strange, I don't care where you live, if you walk into any local brick and mortar, you don't see many people smoking a Churchill sized cigar. But it's still the number one selling sku that Ashton has. Then, there is the Ashton Cabinet. So, that's the Dominican filler, Dominican binder, and the outside wrapper is a true U.S. Connecticut. The wrapper itself has got, I believe, about 6 1/2 - 7 years of age on it. And the filler tobacco has about five years of age. So, people always complain about price, but you're basically smoking a cigar that's been aged for 13 years!

[J.S.]:Yeah. I try to explain to people it's like wine. You know, a nice aged vintage wine. You're going to pay more for that something that was bottled yesterday. It's the same thing with the cigars.

[T.V.]: True. So, that's a little bit about the Ashton line. Let's switch over to the Nicaraguan portfolio that there is. So, consists of two major products, La Aroma de Cuba and San Cristobal. Within the San Cristobal, we carry the Elegancia, which is the milder offering. And, then, on the La Aroma de Cuba side, we have all four brands inside that family.

[J.S.]: You have the Baseline, the Mi Amor, the Mi Amor Reserva, and the Edicion Especial.

[T.V.]: And that cigar has been recently re-blended, with a little bit more strength to it. I have seen them. They are on their way to us. I can tell you that the wrapper is a little darker than the original blend.

[T.V.]: And I wouldn't even consider it a full-bodied or full strength cigar, but it is beefed up a little bit from the original version.

[T.V.]: And then, there are two limited editions: The Ovation and the Noblesse. And that was the first venture since 1985, when Ashton started, that they ever came out with a limited production cigar.

[T.V.]: Yeah, so that's something to keep your eye on. So there you have it: A brief recap of Ashton Cigars. But once again, you guys, thank you for tuning in to Smoke Rings. And take a look at those Ashton Cigars if you get a chance. 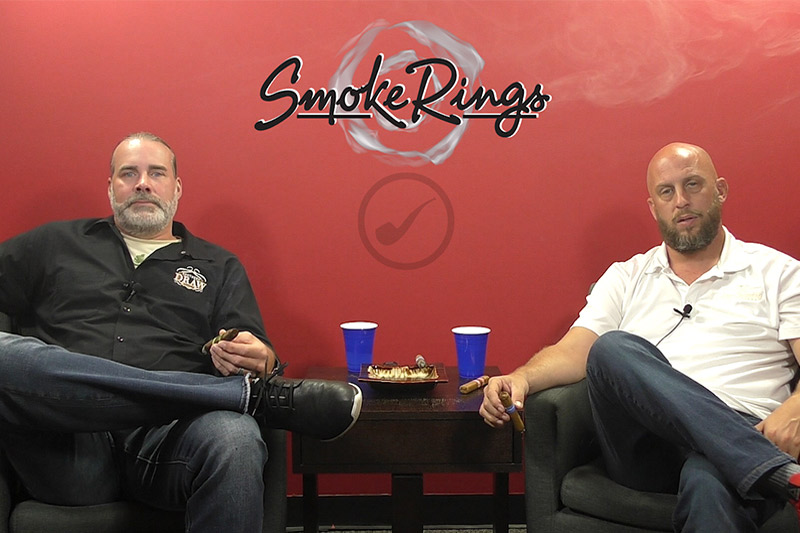 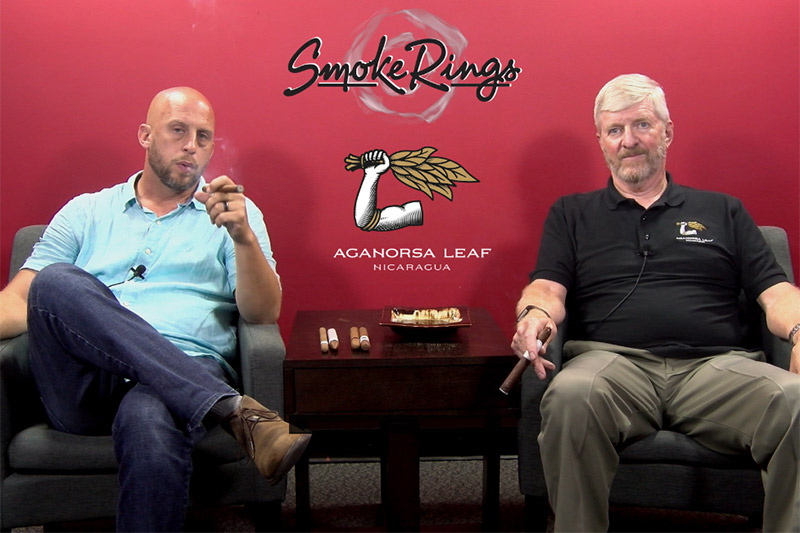 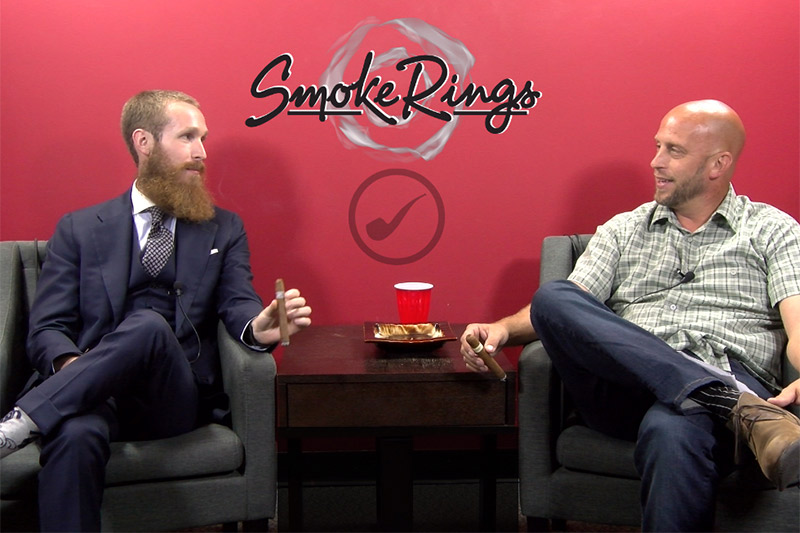