Even if Dan Tobacco's Black Velvet weren't a crossover blend (there is Latakia in there), it would stand out as quite an unusual Aromatic. No fruits, no honey, no vanilla, nor even the usual whiskeys or brandies play a part in this pipe tobacco. Instead, the pressed and ready-rubbed, Virginia-based blend takes aroma and flavor from the namesake cocktail, consisting of chilled stout (Dan Tobacco uses Guinness here) floated atop sparkling champagne. 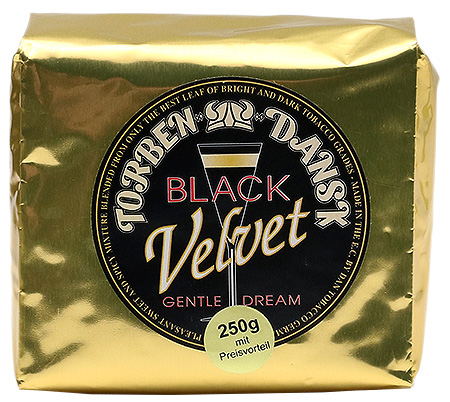 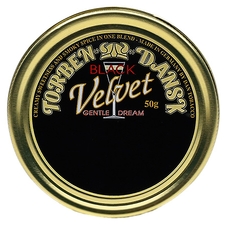 Black Velvet 50g
Customer Reviews (7 Total)
Write A Review
Write a review
Overall Rating:
3.71 out of 5 stars
Love it!
By: Heather C.
Product: Dan Tobacco Black Velvet 50g
One of the best blends I have ever had the luxurious pleasure of enjoying. A true desert island blend that is a rotation worthy smoke. Tin note is wonderful and the smoking experience is equally good, if not better. Highly recommended.
Disappointment
By: Scotty G
Product: Dan Tobacco Black Velvet 50g
I found this blend was like a winding roading the country! I found that every draw tasted different and I personally would not reccomend to a friend.....but maybe my father in law...lol
Fine tobacco
By: Chris C.
Product: Dan Tobacco Black Velvet 50g
Seems there'd be more reviews for this. It's really what I call a fine smoke. It's what I call a stunt blend, and I'm always skeptical about them. But it made me curious and I tried it. It's very successful and what I'd call flavored rather than arom... Read More atic. The latakia holds the show together without taking over as it usually does. It's not about latakia. I do taste Guinness and the hint of fruity vinegary wine all the way through the smoke. It's a mellow even smoke all the way to the bottom. My tin arrived at just the right moisture level and the broken flake is easy to fill. Just take a pinch, roll it a little in your fingers to line the bits up, and poke it into the pipe. Slow sips seem best but it doesn't get get hot or harsh if the pace picks up. Tongue burn seems almost impossible. Whoever came up with this blend pulled off a fine stunt. I'd say try it. Read Less
You gotta try this!
By: Wildcat_Joker
Product: Dan Tobacco Black Velvet 250g
This is a tobacco that delivers on the flavor notes described. Taste of Guinness and the crisp kind of tang you'd expect from a taste of champagne. One of the things I like to do (with all tobaccos ive tried so far) is to test the different flavor r... Read More anges from how aggressive you go from sipping to puffing. Black Velvet seems to deliver fun twists along the way. On the slower sips where the bowl is burning in the cooler mellow range of the ember, I taste the sweetness and tangy zest of the champagne notes. When I get a little more agressive to rebuild the heat or keep the ember more alive along with tamping, the Latakia seems to give the deep base you'd expect from a pint of Guinness with that dark roasty quality. The transformation in between is what makes the fun. You can practically range your flavor preferences accordingly I've found with that style. Absolutely no penalty on relights as it seems to brighten everything back up again. Some drying time may be needed based on personal desire for the behavior in the bowl. This just seems to get better bowl after bowl. Enough said. Try it for yourself and see! Read Less
Nice aro
By: Farkas
Product: Dan Tobacco Black Velvet 50g
I would consider this to be a top shelf aromatic. Plenty to consider here while smoking and picking out the flavors in its profile. Quite rich and heady.
Very interesting
By: Zachary B.
Product: Dan Tobacco Black Velvet 50g
I tried this blend because it sounded very different from blends i've had in the past, and I was not disappointed. This blend is pretty unique. Most of what I tasted were the Virginias, which seemed to be an even mix of brights and darks. The Lata... Read More kia was way in the background, I could taste it but it wasn't strong. The topping is really what made it interesting, as I was hoping. Guinness is the stronger of the two topping flavors, and it came through to me as a surprisingly rich malty taste. The champagne was faintly there, and mixed well with the bright Virginias. It did occasionally have a harshness to it (which I always get occasionally with more aromatic blends), but not bad at all. It probably won't be a regular part of my rotation but it's a great way to change up the palate. Read Less
Aromatic
By: Ditch Doc
Product: Dan Tobacco Black Velvet 50g
I'm not a big smoker of heavy aromatics, but Guinness!!! I had to try. It is pretty good stuff. Even though I don't taste stout, I do taste good tobacco with some nice topping. Not an all the time kind of smoke but I found it enjoyable. Give it a tr... Read More y. Tin note is amazing. Use it for a car air freshener if you don't like to smoke it. Haha. Read Less
View All (7) Dan Tobacco Black Velvet 250g Reviews