Born in Kaohsiung, Taiwan, Jerry Zenn's professional career outside of pipe making spanned 25 years as an automotive mechanic. His start in the pipe world began with a seed of admiration for artisan pipes, one that germinated as time went by and he experienced them more and more, himself garnering an appreciation for Danish design and organic shaping. After years of this, Zenn resolved to begin crafting pipes of his own, mainly taking inspiration from these Danish designs and putting his own twist on them, gaining experience and practice as he worked, and is now one of the foremost artisans in East Asia. This Tomato is an excellent example of the Taiwanese carver's talents, fusing supple curvature and fluid lines with an unflinching organicism and subtle structural element.

Aside from being one of my favorite shapes, the Tomato is also, in my opinion, one of the most effective comfort pipes in all of the pipe world, as its squat, low-slung bowl provides unrivaled space for cradling in the hand. This example is no exception, and in fact, has actually been elevated by Zenn's careful eye for dynamic construction, with a large, wide arc making up the aft side of the bowl, and a tight, almost sharp curve comprising the fore. A lifted heel allows said fore to more readily come to fruition, not only raising the bowl into greater prominence, but pushing the undercurve further upward and tightening the contour of the fore's shape. The effect of this overall carving lifts the aft end of the bowl higher than the fore and urges the shape forward along with the chamber, setting it at an eye-catching angle.

A cheeked transition leads to an incredibly trim shank that meets a thin ring of vulcanite at the pipe's bamboo shank extension. This extension flares continuously to its end, fostering the effect of a dramatic and natural expansion of material from the briar to the bamboo, as well as adding a striking degree of organicism to the composition, as the pale, dense grass is covered in nodes of various sizes. Where it meets the stem, the bamboo is shaped in an almost expansion ring-like style, mirroring that of the stem's and adding a touch of structural firmness to a pipe that is otherwise incredibly supple. The stummel is dressed in a low-depth sandblast and stained an inky, nearly black color, with a lovely, angular growth ring structure revealing itself quavering diagonally across the bowl, contrasting the hues of the bamboo beautifully. 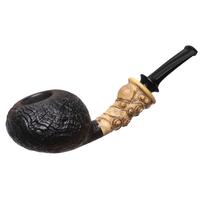 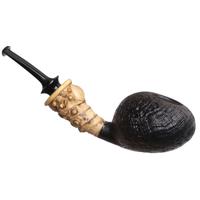 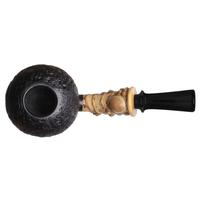 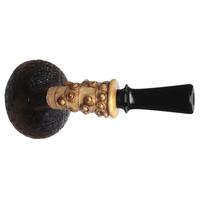 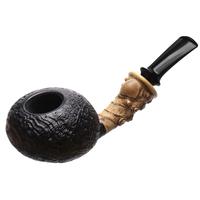