Samuel Gawith's Celtic Talisman is a delicious Aromatic pipe tobacco combining Virginias and Burley with Black Cavendish that's been topped with kirsch — a cherry-flavored liqueur — and vanilla for a delightfully sweet and fruity aroma. 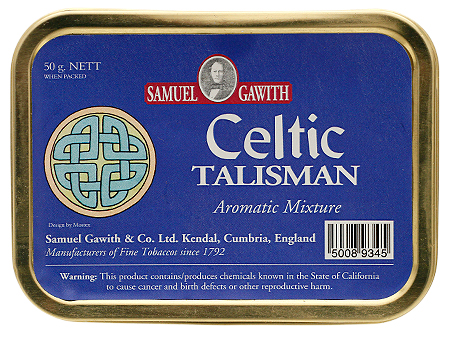 Customer Reviews (5 Total)
Write A Review
Write a review
Overall Rating:
3.80 out of 5 stars
English aromatic close to perfection
By: Ayax g.
Product: Samuel Gawith Celtic Talisman 50g
To name this spectacular blend as a simply cherry aromatic is an understatement. For start it is not that obvious, it is more subtle and mysterious for just that. The smell of the tin is that of kirsch with hints of marraschino cherrys and emblems f... Read More reshness and natural flavour. The virginias add the sweet touch and the burleys emphasize the character for a middle bodied tobacco, while the cavendish obviously appease the strength and keep the round note and preserve a middle strength. An advise, keep the moisture levels in fair proportion, i would say keep it a minute or two outside and then light it, otherways it will lose flavour and strength. Once this is done, the combustion is fair and simple, which denotes a perfect combination and tobacco quality. From start, this is a winner. The accents of liquor are more present and robust in the nose and the light cherry develops, transforming slowly in a creamy, spicy and rich smoke with a controlled nic kick. Then the burley develops its character and the nutty contours become more evident, the sugars transform and the cherry notes come as background, enveloped by the nutty substance while the smoke takes its more robust body only mildly appeased by the cavendish. I would say this is an untypical aromatic, or at least one that follows the english tradition, the old ways and the naturality of tobacco in perfect harmony. Perfect name for such a perfect mixture. Truly a little treasure. Read Less
Huh
By: John p.
Product: Samuel Gawith Celtic Talisman 50g
Smells like cherries, thats all that is interesting about this tobacco.
Worth Buying Again
By: Eddie M.
Product: Samuel Gawith Celtic Talisman 50g
I would recommend this to new pipe smokers. It has just enough flavor to satisfy the taste for an aromatic but it's not overwhelming to the smoker that's used to traditional blends. It also makes for a perfect change after heavy indulging on the Pe... Read More rique and Latakia :-) Read Less
Decent for an aromatic
By: Markus
Product: Samuel Gawith Celtic Talisman 50g
This is a decent aromatic, I found it to be too wet right out of the tin, so I dried it for about an hour. Being an aromatic, it needs some moisture to retain its flavor. Smoke it too fast and it will bite you, it wants to be smoked slow and steadily... Read More . The cherry flavoring does mute the natural tobacco taste a bit, but you can still taste some of that nutty burley in there. I will probably put this one away for a while and save it for when I’m in one of those aromatic moods. Read Less
Very Good!
By: Pmaynard19
Product: Samuel Gawith Celtic Talisman 50g
This is a very fine tobacco. Nice subtle cherry and vanilla flavors. Not too strong in the bowl and easy on the palate. I was hoping for just a bit more cherry aroma and flavor but all in all this is an enjoyable smoking experience.