Hans "Former" Nielsen began carving pipes in 1956 and has since become a legend of Danish pipe artistry with a worldwide following. In addition to his exquisite pipes, he's released his own line of pipe tobaccos — several of the blends fittingly named after briar's grain patterns.

Former's Private Flake features a mix of different Virginias from the United States, Africa, and India, plus Burley. The casing consists of several extracts such as fig-tree-fruit, tamarind, nut, truffle, apple syrup, and finally rounded with Irish top flavor. 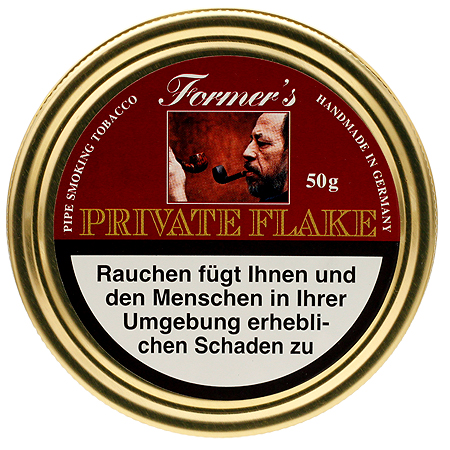 Customer Reviews (8 Total)
Write A Review
Write a review
Overall Rating:
3.94 out of 5 stars
Very different & good
By: Tom C.
Product: Former Private Flake 50g
This is a good blend I like the extract topping's. I liked it so much I bought a pound of it two tin's at a time. I smoke it in my beautiful Former Pipe!
An aromatic? Really?
By: Farkas
Product: Former Private Flake 50g
Uhh, you know.. its fine.. i have had better flake tobacco. Peterson Navy Flake being one. Or i just may be a complete fool, but, all these flavors and nuances arent coming around for me. Apple syrup and irish top flavor? Dear god where? I would love... Read More that! But i missed it. I even rubbed a flake out and yeah.. just not that impressed. Read Less
Mild and sweet
By: janabi
Product: Former Private Flake 50g
The topping and casing is not very evident, very similar in taste to stockebby luxury twist flake with more sweetness but not enough to mask the tobacco, matter of fact i can barely taste it. Now the base is very balanced, virginia burly slow burning... Read More and mild to medium. Not the best for the asked price but not the worst when it comes to flake offerings. Al kanabi Read Less
brilliant
By: steppx
Product: Former Private Flake 50g
An interesting semi aromatic. Very highest quality stoved virginia cased very lightly with fig and tamarind. I taste a subtle sour apple taste, too. There is burley but its far in the background. Reminds me of Gawith's BS flake...exclusive to the dan... Read More ish pipe shop. A favorite and i wish it were more available. Read Less
great taste
By: Alex c.
Product: Former Private Flake 50g
Second review. This is a blend which may divide. If you love to smell your baccy, this is for you. Slow burning, economical, once/twice a week at night. The smaller round tins and labels are a bonus.
Great blend
By: Robert M.
Product: Former Private Flake 50g
While I agree this is an aromatic I get more of a great Virginia blend from this outstanding smoke. Lights so easy and burns super cool. You do get a bit of nicotine tingle but not really that much. Oh the taste is right down my alley. I love a good ... Read More Virginia and this gives that wonderful sweet hay baking bread flavor. Yes there is a hint of perhaps fig and alcohol but it is very very faint. Room note is nice but very mild. If you love a good Virginia blend that has taste this is one of the best. As an aromatic it leaves a bit to be desired. I have added this to my rotation not as an aromatic but more as a top notch Virginia ! Read Less
My favorite smoke
By: Eric S.
Product: Former Private Flake 50g
This is currently my favorite smoke. Mild, cool, with very sweet flavors, and a pleasant...but not overbearing...room note. Best if sipped slowly and great for relaxing.
OK
By: Alex c.
Product: Former Private Flake 50g
I thought I would move to a cased tobacco, as I tend to like simple blends. Let this one dry in the tin with lid off. It does case your mouth, I would not call it tounge bite. The toppings are rich, but something goes a miss. Once in a while it is a ... Read More pleasant rotation to a pipe habit, better late at night. Read Less
View All (8) Former Private Flake 50g Reviews